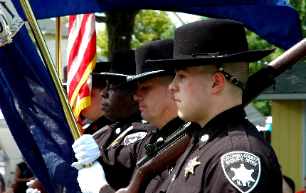 The Columbia County Sheriff's Office is accredited by the New York State Accreditation Council as a full service law enforcement agency.  The main office is located at the Public Safety Facility in Greenport, New York, a short distance from the City of Hudson.  There are Sheriff's satellite offices located in the Towns of Kinderhook, Ancram, Germantown and Chatham.

There is a full service 24 hour Sheriff's Office Sub-Station on Route 23 near the intersection of Route 22 in the Town of Hillsdale.

The men and women of the Law Enforcement Division are certified police officers sworn to serve and protect the 64,000 residents within the 644 square miles of the county.  The Sheriff's Office has jurisdiction throughout Columbia County and focuses on those areas which do not have police departments or a police patrol on duty.  While on patrol, making arrests, investigating accidents and performing the other routine law enforcement functions of a police officer, Deputy Sheriff's also carry out civil enforcement functions and many have taken on the added duties and responsibilities of supervisors, investigators, evidence technicians and as members of special operations teams such as K-9, SWAT, DIVE and the Marine Patrol.  The Sheriff's Office works closely with the other police and public safety agencies to provide the best service possible.

The Law Enforcement Division consists of Uniformed Patrol, Criminal Investigation and Communications branches of the office.  Pursuant to N.Y.S. County Law, all Deputy Sheriff's are required to reside in Columbia County.  Many are raising families and volunteer with fire companies and other organizations in our communities.
​